As fraudulent activity goes, it was a seemingly miniscule theft — a mere $2,000 pilfered decades ago.  Hardly worth raising an eyebrow.  But the case of Mark Jenkins is a prime example of how a seemingly innocuous case of fraud can mushroom into a major theft, requiring a forensic accountant to conduct a fraud investigation and calculate the loss.

“Like so many fraud cases, the story of Mark Jenkins is a cautionary tale,”  said David Anderson, principal of David Anderson & Associates, a Philadelphia forensic accounting firm that provides a full range of fraud investigation and fraud deterrence programs in the Delaware Valley.  “Companies need to have comprehensive fraud deterrence measures that cover employees at every level.  No employee should ever be able to manipulate documents to his or her personal advantage.  The opportunity simply should not be there.”

The story of Mark Jenkins, whose name has been changed to protect both his confidentiality and that of his former employer, begins in 1989 when Mark was named Controller of a small West Coast subsidiary of MegaGiantInternational Corporation, according to Anderson, a forensic accounting expert in Philadelphia. It was a dream job but for one thing — the starting salary was $2,000 less than Mark had asked for. He accepted the position anyway.

On his first day on the job, Mark learned that one of his responsibilities was to provide wage and salary changes to the payroll department in New York City.  There was no approval process, no signature required, no checks and balances, explained Anderson, who also is a Certified Fraud Examiner in Philadelphia.  Mark was simply to report the changes.  And so he did, reporting his own salary at $2,000 more than it really was.  Now, it really was his dream job.

Anderson, whose firm provides a full range of forensic accounting services in Philadelphia and the Delaware Valley, said the $2,000 salary bump was the only fraud Mark Jenkins ever committed at his company.  In fact, he went on to have a stellar career at MegaGiantInternational Corporation.  He rose steadily through the ranks, being promoted to Controller of a larger subsidiary in the same division; to Division Controller; to Group Controller; and finally to Group Chief Financial Officer, Anderson said.

Over his 25-year career, Mark received an average of 8% per year in salary increases and an average of 10% in annual bonuses, said Anderson, a forensic accounting expert in Philadelphia.  Additionally, the company provided a 3% 401-K match each year and also made an average 8% contribution each year for Mark to its profit-sharing plan.  In December 2014, at age 66, Mark retired.

The discrepancy in Mark’s starting salary was discovered when the company conducted a payroll reconciliation to assure Mark’s pension records were accurate, explained Anderson, a forensic accountant and Certified Fraud Examiner in Philadelphia.  A forensic accounting expert subsequently was engaged to determine the extent and impact of the fraud.

So, what did Mark’s little fraud end up costing the company?  As the accompanying spreadsheet* shows, the single largest windfall came from the excess salary the company paid as a result of wage and bonus increases compounded over 25 years — nearly $147,000.  In addition, the company paid more than $16,000 in retirement plan contributions, which, incidentally, would have grown even more as the contributions were invested.  Mark’s one-time little $2,000 fraud in 1989 had cost the company a whopping $163,000. (Click on the chart for a closer look.) 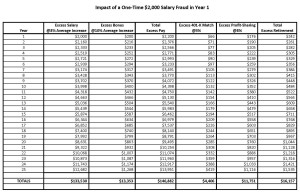 “Clearly, the fraud deterrence measures the company had in effect in 1989 were faulty,” said Anderson, whose firm provides a full range of forensic accounting services in Philadelphia and the Delaware Valley.  “No one should be able to set their own salary in the payroll system. The company should have required the written approval of the employee’s superior.  And the payroll department should have confirmed the starting salary with the Human Resources Department.  This was a fraud that never should have happened.  It was easy to prevent.”

Anderson, a forensic accountant and Certified Fraud Examiner in Philadelphia, said that with Mark’s pension as leverage, MegaGiantInternational reached a settlement with their former employee regarding the overpayments, and his pension was adjusted to the lower numbers.

This Tale of Fraud is part of an ongoing series of articles that examine actual cases of fraud carried out in businesses, non-profits and government offices, how fraud investigations played a part in discovering the fraudulent activities, and the fraud deterrence measures that might have thwarted them.

*NOTE:  On the spreadsheet, all salary increases, bonuses and profit-sharing contributions have been averaged.  In actuality, the increases fluctuated with the greatest increases occurring with promotions and good operating years.